Justin Trudeau is the most anti-life, anti-family Prime Minister ever in the history of Canada.

Just consider his record over the three short years he and his Liberals have been in power: 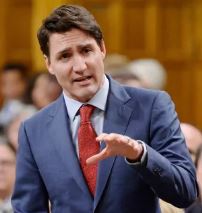 In addition to the above-listed abominations, in 2018, PM Trudeau and his Liberal totalitarians concocted the hated Summer Jobs Attestation political litmus-test, which demands that Canadian employers, regardless of their religious or conscientious beliefs, must sign a document pledging support for Liberal fake-rights to abortion and homo/transsexual fetishism, or else be disqualified from receiving federal funding grants to hire students for summer employment. The Attestation bludgeon is an outrageous tool of discrimination that clearly targets Christians and other people of good will who rightly abhor the Liberals' moral licentiousness.

Furthermore, just this past October, the Trudeau Liberals legalized the commercial sale and recreational use of the highly-addictive street-drug cannabis (marijuana), making it more available to the public, including youth, while profiting from this expansion of the drug trade now under governmental "regulation". Coming soon to a retailer near you and your family.

Considering all these destructive and deadly developments, we must admit the terrifying truth:

Canadians need to be protected from the Trudeau Liberals and their wholesale legislative marauding.

How do we accomplish this? In the 2019 federal election, vote for moral men and women who value the precious gilf of life, the natural human family, freedom of religion and conscience, and the future of our country and our children. Remember: we must all live with the consequences.

To help you keep on top of developments as the federal election draws nearer, CLC is providing you with a link right here to our growing list of pro-life, pro-family candidates who will be running federally in 2019. Please be sure to check this list for updates in the weeks and months ahead to find out if a pro-lifer is running in your federal riding, and how you can get involved in their election campaign as a donor and/or volunteer. These good candidates will need an army of volunteers and supporters to build a campaign machine that can overcome the Liberal and equally harmful NDP incumbents, who'll be trying to cling to power.

To get involved in the campaigns of any of the listed pro-life candidates, please let us know here.

If you know of any other pro-life candidates, please e-mail us here.

Thanks, and God bless,