Do we live in a police state? Is Canada no longer a constitutional democracy? You might think so if you look at the recent left-wing trend to enact “bubble zone” laws all across our Dominion.

The most recent example is in Alberta, where Bill 9 was passed in 2018 under former NDP premier Rachael Notley. That tyrannical Bill was squarely aimed at shutting down and demonizing conservative, pro-life voices in the province. Albertans are now forbidden from exercising their full constitutional rights within large, city block-sized areas surrounding abortion killing centres. You might be standing on a public sidewalk or in a public park, but if you are a pro-lifer in the “zone”, you have fewer rights and freedoms than the pro-abort next to you. If you look the wrong way, say the wrong thing, or pray “incorrectly”, you will be arrested by police.

In Ontario, the same type of law was passed a year earlier under the former liberal government of Kathleen Wynne. That law prohibits “advising a person to refrain from accessing abortion services” and “informing a person concerning issues related to abortion services”. In other words, Ontarians’ free speech rights are suspended – all because the pro-aborts want to silence you.

The “bubble zone” law in Ontario has thus far resulted in the arrest of two individuals – Mr. Cyril Winter (who is now deceased) and Father Tony Van Hee (who is fighting the charge in court). Ironically, these men were not even protesting abortion when they were arrested, but were simply holding up a sign that read: “The Primacy of Free Speech: Cornerstone of Western Civilization”. 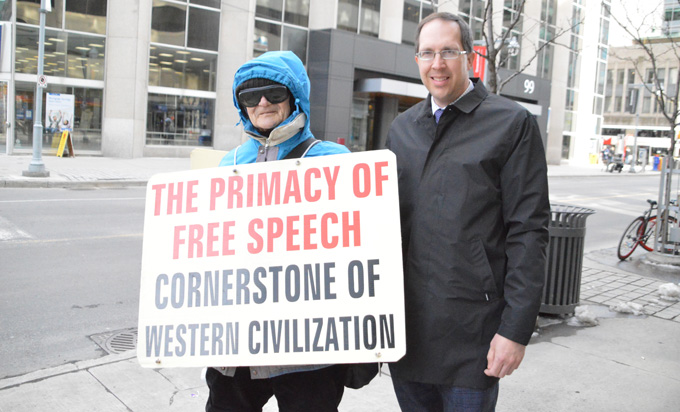 Enacting a law that takes away our right to protest said law is the mark of a totalitarian regime, not a functioning democracy!

BC, Quebec, and Newfoundland also have similar types of draconian laws on their books discriminating against pro-lifers.

It is imperative that we stand together against “bubble zone” laws whenever and wherever they raise their ugly heads. They are nothing other than a protection racket for abortionists, helping them line their pockets through the state-promoted murder of pre-born babies. And this at the expense of everyone’s civil rights!

That’s why I’m asking you to join us in reaching out to the Minister of Justice and Minister of Health in Nova Scotia.

Some rabble-rousing pro-abortion activists have been recently clamouring for a “bubble zone” law in Nova Scotia. They have been fearmongering about the “threat” of violence from pro-life protesters around abortuaries – violence that simply does not exist!

The only violence taking place is what goes on inside the abortuaries.

We know that the Liberal government in Nova Scotia is sympathetic to the pro-aborts and may very well give into their demands. So we want to head off this new attack on our freedoms before it even gets to the legislature.

Would you consider signing our petition to call on the Ministers to reject any and all proposed “bubble zone” bills in Nova Scotia?

Also, once you’ve signed, please be sure to share this petition with your friends, family, and church community.