CLC has been busy the past few months with national policy issues that are undermining parental rights and the sanctity of human life, such as Bill C-6, the so-called “conversion therapy” ban, Trudeau’s euthanasia expansion law, and other files.

However, we’ve also been keeping an eye on the complete meltdown of the Catholic school system in Toronto.

This is why we’re asking you to donate towards the legal defense fund of faithful Catholic School Trustee, Michael Del Grande, so that he can continue to be a witness to Christian truth in Toronto. 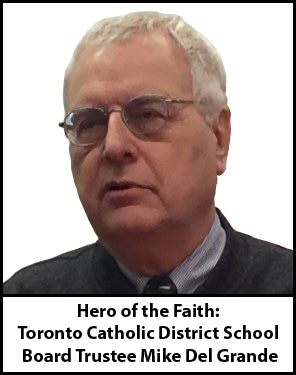 The total collapse of the Christian faith in the TCDSB has been striking, with recent developments such as these:

With heresy run amok at the TCDSB - and almost totally unopposed by the Cardinal Archbishop of the diocese - it has become all the more important that the heroic TCDSB Trustee, Michael Del Grande, win his lawsuit against the board. That will ensure he can continue to fight for a return to authentic Christianity by this wayward board.

Del Grande was found “guilty” of violating the Trustee Code of Conduct for having defended Catholic doctrinal teaching when he opposed a motion to have the Board accept “gender identity” and “gender expression” as protected grounds for non-discrimination.

The anti-Christian motion that Del Grande opposed promised to open the doors to students and teachers who suffer with gender dysphoria being permitted to come to school dressed in opposite-sex clothing, in total contradiction of Catholic teaching.

The Code of Conduct change also threatened to make it de-facto “illegal” for faithful teachers and students to object to transgender ideology.

Ultimately, the transgender ideology motion passed, but LGBT activists ran a hate campaign against Del Grande to try to force him to quit, or get him thrown off the board.

On November 11, 2020 trustees unlawfully voted to find him "guilty" of a Code of Conduct violation, and to force him to apologize for having opposed Gender Ideology. The illegitimate "guilty" verdict included and order for Del Grande to undergo LGBT re-education training, and to remove him from any committees of influence.

Campaign Life Coalition has been helping to fundraise for Del Grande’s legal defense so that these restrictions can be removed, his freedom of speech as an elected official can be restored, and thus he may work to reestablish the lost Catholicity of the TCDSB.

Please donate to the crowdfunding campaign by clicking here.

You may be wondering, “What exactly would my contribution help to achieve?”. Well, it will allow us to continue paying the bills for his legal counsel, Dr. Charles Lugosi, who has been writing top-notch legal opinions for Del Grande’s pursuit of justice.

Please have a read of some of the legal arguments Dr. Lugosi has already formulated for Trustee Del Grande along the path of the latter’s persecution:

I think you’ll be impressed by the powerful case law and constitutional arguments that have already been written by Del Grande’s lawyer. This excellent work formed the basis for the application for judicial review that has been submitted to an Ontario court asking a judge to overturn the unlawful guilty verdict and other restrictions imposed on Del Grande.

However, the legal team has more work to do, and still has to argue the case in court, so the bills are going to climb beyond the $108,000 that has already been paid.

I need to impress upon you that this lawsuit is actually bigger than Del Grande.

If a precedent is set with Del Grande, why not go after all other Catholic and Public school trustees who dare to defend parental rights and morality?

Why not go after elected representatives in provincial legislatures to restrict speech that’s not approved by the left?

Why not go after federal MPs, to police their speech?