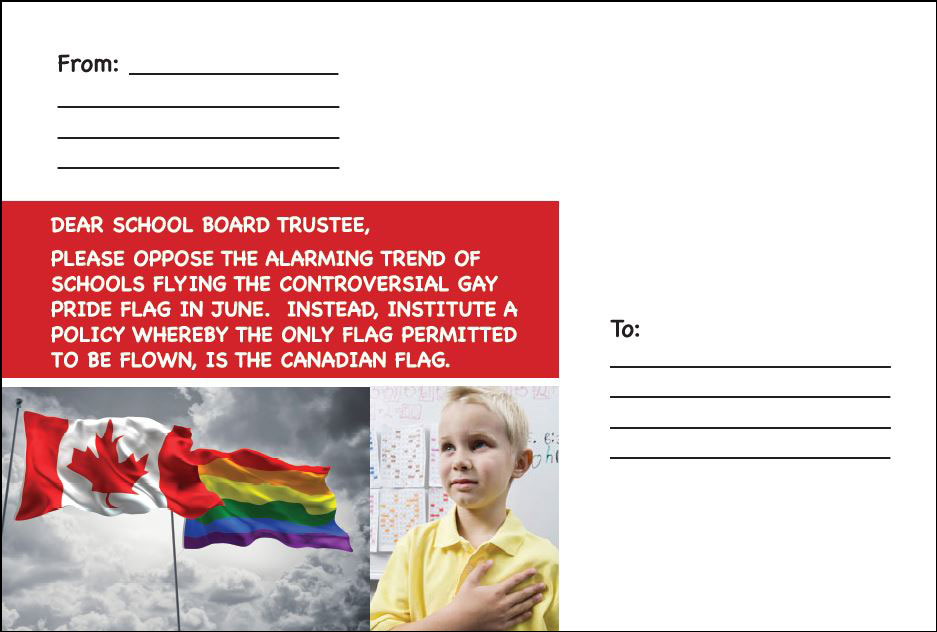 View Inside
The homosexual "pride" flag is a political symbol that divides our communities and creates conflict. It therefore has no place on the school grounds.

CLC has produced a pro-parental rights post card designed to help concerned parents, grandparents, and other responsible citizens voice their outrage at this blatant propaganda tactic aimed at elementary school children by sex-activists.

We're making our pro-parental rights post card available for purchase in bulk packs for our supporters who want to send one to every trustee in their school board, or to share with other parents to get a local campaign going in advance of the June homosexual flag showdown that is coming.


Post card:
Don't force the gay pride flag on schools (package of 12 cards).
Add To Cart - $4.20
Postcard: Stop the passage of Bill S-202 and the push to criminalize Christianity 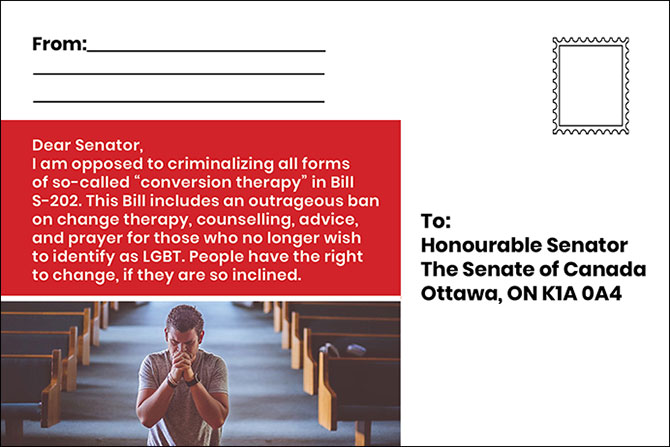 View Inside
Bill S-202 is a piece of legislation which would ban the practice of something which is commonly known as “conversion therapy.” Modern forms of this therapy can help men and women overcome unwanted feelings of same-sex attraction; it can also help people who are confused about their biological sex to rediscover their true selves. This Bill, however, would ban these therapeutic treatments, including any forms of counselling, advice, or even prayers, for those who no longer wish to identify as LGBT. That’s why CLC has designed a special postcard to help concerned Canadians who don’t want to see a new law which would treat people of faith like criminals for simply following their deeply-held religious beliefs.

You can purchase these postcards in bulk packages. Each bundle includes a card to send your local MP and one for every senator from your home province who is serving in Ottawa. The goal is to tell our lawmakers that they need to say NO to Bill S-202.