Read this in another language:

The controversial curriculum was never given another thought by parents until October 2014 when the new Liberal Premier, Kathleen Wynne shocked the entire province by announcing she would reintroduce the despised sex curriculum in 2015.  Months of parental protests erupted across the province, but the Wynne Liberals feeling untouchable because of their majority, imposed the age-inappropriate sex program on children, ignoring the views of parents entirely.

The curriculum was briefly repealed by Doug Ford in 2019, who made that campaign promised during the 2018 provincial election to help secure a majority government. However, after an orchestrated media campaign by Canada's news outlets in conjunction with leftist teachers unions, Premier Ford caved and fully reinstated the Wynne sex program, word for word.

Anal intercourse is presented in a way that students will interpret as carrying no higher risk for Sexually Transmitted Infections than vaginal intercourse, an irresponsible and misleading presentation of the former which carries a 3000% higher risk for contracting HIV. The curriculum also downplays the seriousness of contracting HIV, potentially leaving the impression with students that it's not really that big a deal. A section on HIV and AIDS has an undertone of making it acceptable and normal for individuals who are HIV positive to continue having sex with others. Of course this is not science-based teaching. It's political and social engineering. It is irresponsible and literally put children’s lives at risk.

In addition to peddling to elementary school students the controversial and very flawed theories of "gender identity" and "gender expression", Ontario's early age sex curriculum document has a strong undertone of presenting sex as a purely recreational activity whose purpose is pleasure, apart from love or marriage.  In fact, the words "love" and "marriage" never appear once in the sex-education strand of the curriculum. Not a single mention. Many parents believe that reveals the radical mindset of its writers, if not the philosophical underpinnings of the curriculum itself.

The curriculum document encourages the use of condoms and artificial birth control to prevent pregnancy and STDs, something that is totally incompatible with the Catholic school system. Yet the Ontario governments of Wynne/Ford insist that Catholics must teach it nonetheless.  The curriculum also includes a reference to "reproductive health", which is a known euphemism for abortion.

It is unclear how Catholic schools can implement teaching on birth control, abortion, the idea that being male or female is a social construct, gender expression, and the 6-gender theory, even if retrofitted with a "Catholic lens". Catholic moral teaching forbids abortion and the use of artificial contraception as grave evils. The theory of gender identity, gender expression and the idea that there are more genders than just male and female directly contradict Christian anthropology of the human person.

Faithful Catholic observers find it hard to believe that the Institute for Catholic Education (ICE), which was tasked with retrofitting a "Catholic lens" onto these problematic teachings, would be able to accomplish such a feat since these ideas are fundamentally incompatible with Catholicism. That doubt is heightened by the knowledge that the board of ICE includes two member from OECTA, the same "catholic" teachers union which marches annually in the homosexual pride parade.  OECTA is also fully in support of the gay pride clubs known as GSAs being in Catholic schools.

To save parents having to read through 244 pages, CLC has created a detailed summary with some excerpts of the more controversial elements in the new curriculum.  See below.

EXCERPTS FROM THE 2015 SEX-EDUCATION CURRICULUM

Grade 7:  Keep a condom with you

Grade 8 (age 13):  "Make a personal plan' about your sexual activity

It's important to consider the fact that this curriculum was also written under the direction of a confessed child sex predator, Mr. Benjamin Levin. He was the Deputy Education Minister at the time, serving under then Education Minister Kathleen Wynne.  Levin was charged by police with 7 child pornography related charges, and confessed to three of them. 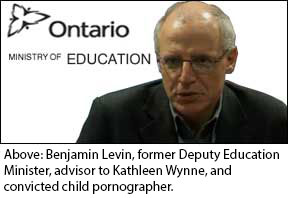 Graphic testimony from his trial revealed how grotesque was his perverted attraction to children. While texting on a chat site with an undercover officer  he thought was a mother interested in molesting her own daughter, he instructed "on how to groom" the child for sex, including specific techniques she could use to lower the child's natural inhibitions. Levin told undercover officers he had sexually assaulted his 3 daughters, and now that they are grown and have young children of their own, he hopes they will one day share their kids (his grandchildren) sexually with him.

Many people are questioning whether "grooming" could have been a reason for Levin introducing these overly explicit subjects at such delicate ages in the Liberal curriculum. Is it conceivable that the curriculum may have been designed by Levin to “prime” children, so as to make them sexually available?

The safety of children is too important to ignore Levin's hand in this curriculum.

Can we know a curriculum by the company that it keeps?

It's not average moms and dads who are asking for this curriculum to return. In fact 160,000+ Ontario parents have signed petitions against it.  So who is actually pressuring the Liberals to bring back the controversial curriculum?

Several radical organizations, or those with ties to radical groups have been publicly lobbying the Liberals to bring back the 2010 curriculum since it was first retracted by Premier McGuinty. These include:

Parents across Ontario are immensely grateful to Premier Doug Ford for repealing the Wynne/Levin sex curriculum.

However, the biased mainstream media has orchestrated a fake news campaign to try to pressure Ford to lose his nerve, and betray his campaign promise to parents.  The left wing media has unleashed hundreds of articles and news reports making ludicrous, unhinged claims, like that “transgender” and "gay" children would literally die if Ford were to repeal the curriculum.

That is a total lie of course.

Please contact the Premier and the Minister of Education and urge them to repeal the radical, child-sexualizing curriculum in its entirety and to require schools to teach the previous curriculum that was in place in 2014 until such a time as a new sex ed curriculum can be created based on genuine consultation with parents.