Next Thursday May 23rd, a critical vote will take place at the Toronto Catholic District School Board. The vote is important to preserve the Christian faith of children in Toronto’s Catholic schools. That faith is currently under threat from a sexual agenda imposed by the Ontario Liberal government under the guise of “anti-bullying”.

We realize you may not be Catholic, but you may have friends in Toronto who are and can pass on this info. We also know there are many families from other faith traditions who place their children in Catholic schools. They often do so to avoid the sexualization of children that is rampant in public schools. 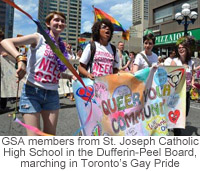 These homosexual-activist clubs were mandated by the Liberal government last year. That government directive was unconstitutional because it requires the Catholic Church to violate its religious beliefs on marriage and sexuality. The presence of GSAs (or homosexual clubs by a different name) in Catholic schools promotes a positive view of homosexual unions and therefore, is unacceptable.

The new Motion requires Catholic schools to offer positive, non-controversial, anti-bullying supports to ALL students, by following a model co-written by Ontario’s Catholic bishops. That model is contained in a document called RESPECTING DIFFERENCE, which you can read here.  Read the full text of Trustee Tanuan & Del Grande's motion here.

We urge all Catholic ratepayers, whether they currently have kids in school or not, to flood the trustees with phone calls and emails, urging them to support the ban on gay-activist clubs and implement instead, the Respecting Difference model.  The May 23rd meeting begins at 7pm. You may also consider attending the board meeting in support of Trustees Del Grande and Tanuan. The location will be 80 Sheppard Ave East, North York.

If you don’t know the name of your trustee, you can find it here by inputting your street address under the .

To help you understand the type of activism and propaganda that is typical for these "Catholic" gay pride clubs, check out the "attitudes survey" created in April by the GSA-type club at Regina Mundi Catholic High School in London, ON.  The survey plants the idea in the minds of kids that  being "against homosexuality" is "extremely homophobic". Teachers distributed it in class to students, without parental knowledge. The survey was clearly designed to normalize homosexual relations in the minds of students, and lead them to reject the religious beliefs of their Church.

Thank you for helping protect the faith of our children by contacting the Catholic trustees.