News > Partial victory in TCDSB vote for Board Chair

Partial victory in TCDSB vote for Board Chair

On November 28th, the Toronto Catholic District School Board held a crucial vote for the position of Chair of the Board, to take over from Maria Rizzo, the controversial current Chairperson.

Mike had led the charge against adding Transgender Ideology into the TCDSB Code of Conduct as a protected class for “non-discrimination”. Adding this ideology would result in boys being permitted to come to class dressed up as girls, and male teachers to present themselves to students in high heels, lipstick and a lady’s wig, with our without mutilating sex-change surgery.

Markus had been the most vocal proponent of adding the anti-Christian terms “Gender Identity” and “Gender Expression” to the Code, second only to the rabidly pro-LGBT Trustee Maria Rizzo. Sadly, the terms passed by a vote of 8-to-4 at a November 7th Board meeting.

In an effort to sabotage Mike’s chances of becoming the next Chair, Maria Rizzo as well as the ultra-liberal Toronto Star, CBC News and others, had orchestrated a weeks-long hate campaign against him. The media outlets pumped out a torrent of hate against Mike accusing him of being a “homophobe” and “bigot”. These were ridiculously slanderous accusations which only proved what more and more Canadians are realizing: that these media outlets are fake news producers, and they're the real bigots, so clearly choking with hatred against Christianity in the stories they write.

The main goal of the smear campaign– aside from the favorite liberal sport of making ideological opponents grovel, beg forgiveness and renounce their beliefs– was to scare the other trustees off of voting for Mike. Markus would thus be installed as Chair, and from those lofty heights, could continue Rizzo’s work of eradicating the last vestiges of Catholic belief from our schools.

If Markus were permitted to seize the Chairman’s gavel, the destruction he could wreak would be enormous. Two recent examples illustrate the depth of his ignorance and opposition to Catholic teaching and Sacred Scripture. On Nov 7th, he falsely claimed that the Catholic Church has abandoned its former “judgmental teaching” on homosexuality and transgenderism. On Nov 25th, he called the words of Jesus from Mathew 18:6, a “death threat”, after someone quoted the Scripture to him. 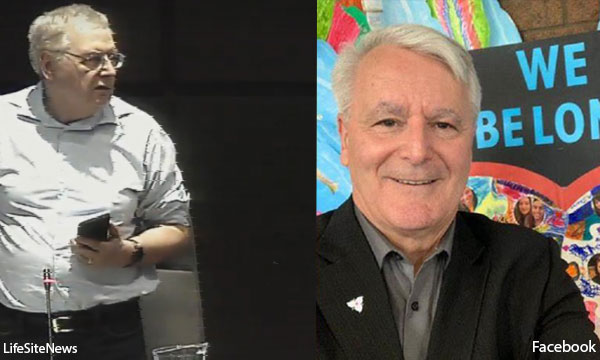 The opportunistic device that Mike’s enemies used to smear him in the pages of national newspapers and TV news reports was to spin a facetious amendment he had proposed at the Nov 7th Board meeting, so as to make him look like the “evil” one, even though he was just trying to defend the truth of Christ.

Mike’s amendment was an attempt to shame his colleagues into voting against “Gender Identity” and “Gender Expression” by trying to make them see that it would be wrong to adopt as board policy, an anti-Christian ideology and lifestyles that are condemned by the Church.

At that meeting, Mike downloaded a list of Sexual Identity Groups, including many that are sometimes part of the LGBTTIQ2SLMNOP alphabet soup of sexual identities which keeps growing all the time. These included polygamy and pedophilia, amongst dozens of others (which, by the way, there is a serious movement underfoot to legalize).

To paraphrase, Mike then said to his fellow trustees, "Listen, you’re considering voting for terms that violate Catholic teaching. It's a slippery slope. If you approve those anti-Christian terms so as to avoid allegedly 'discriminating' against certain groups, why don't you vote to make all these other sexual identity groups, here, a protected class for non-discrimination as well? Doesn't Jesus love them too"?

This was a fair analogy, so as to try and make his colleagues really think hard about the fact that they'd be betraying the Church for the sake of political correctness.

The propaganda campaign by the media and Rizzo lasted a full three weeks and became a distraction. Those who know Mike Del Grande, know that he has the heart of a servant. In fact, Mike left his Toronto City Council job paying $105,000 per year because he felt a calling to serve on the Catholic board, where he now earns just $18,000 per year. That’s sacrifice.

For the greater good of the TCDSB, and in order to let the controversy die, Mike decided to withdrew his name from the race for Chair and instead, to throw his support behind Ward 1 Trustee Joseph Martino for Chair. This would at least block Markus from acquiring the gavel and continuing Rizzo’s project of de-Christianization.

Well, we have good news for you! Mike’s compromise strategy succeeded. Joseph Martino is the new Board Chair, winning in a 7-to-5 vote. The De Domenico/Rizzo alliance has been thwarted!

What does this mean? Well, it means Trustee Del Grande was not defeated.

He still retains significant influence in Board decisions and policy over the next year. And that’s a good thing. The media mob so very much wanted to make him grovel and to enjoy watching him renounce his principles, as they’ve succeeded in pressuring so many other ‘conservative’ politicians to do (e.g. Andrew Scheer, Doug Ford). But they didn’t get their way.

However, the good news doesn’t stop there. According to our analysis, the anti-Catholic alliance of Rizzo, De Domenico, Di Pasquale and others was completely shut out of important committees. From what we can tell, they are literally in charge of ZERO notable committees.

Please remember to thank Him for this partial victory. Of course, we wanted to see Del Grande as Chair, but this was a far better result than the alternative of having De Domenico in charge.

Please take a moment to email Trustee Del Grande and express to him your gratitude for his faithful defense of Christian doctrine in Toronto’s Catholic schools. Encourage him to be not afraid of the bullies in the media, and to continue standing for the truth of Jesus Christ.

Please also consider emailing the new Chair, Joseph Martino. First, congratulate him on his win. Then, encourage him to defend Catholic schools against secular, anti-Christian demands.

Thanks and God bless,

P.S. Another surprise development that happened the day before the Nov 28th vote, was an opinion column by the Catholic, former Member of Parliament, Joe Volpe, in which he eviscerated Maria Rizzo’s “toxic legacy”, defended parental rights in the TCDSB, and expressed support for the constitutional right of Catholic schools to stay authentically Catholic. Read Volpe’s great article here.

P.P.S. We wish to thank all the Campaign Life supporters who helped achieve this partial victory by signing our petitions, emailing the trustees at our request, sharing our articles, and attending our Rizzo Resign Rally at the TCDSB head office. We believe the pressure you helped us to exert contributed to blocking the De Domenico/Rizzo agenda, and defending the heroic Mike Del Grande. THANK YOU!