Social conservatives propelled Doug Ford to victory. And he still needs us to beat Kathleen Wynne.
Doug Ford won the PC leadership on Saturday by a razor-thin margin, beating the pro-abortion and pro-transgender ideology Christine Elliott by a mere 1.2% on the final ballot. Ford ended up with 50.6 per cent of electoral votes to Elliott’s 49.4 per cent.

It has been almost universally acknowledged by the mainstream media that the social conservative vote is the key factor which crowned him king. That’s indisputable based on analysis of the numbers.
Read More Comments

Student summer jobs, the latest casualty in Trudeau’s war on Canadian values and freedoms
If you’re an employer that believes that life should be legally protected from the moment of conception until natural death, or in the biblical definition of marriage as between a man and a woman, or that gender isn’t fluid but biologically defined… sorry but not sorry.
Read More Comments

More reasons why Patrick Brown can’t be trusted. Some will shock you.
On November 13th, the PC Party announced the vote results of the winning policy proposals that would guide a future PC government. Every single one of the 139 policies that party members voted on from November 2nd to November 6th passed by a landslide; not a single one of the 139 policy proposals were defeated by voters, not even those so poorly written that you can’t understand what the heck it means. Curiously, most of the proposals garnered less than 15% NO votes.

That’s a very peculiar result, given that the two largest wings of the PC base (social conservatives & fiscal conservatives) are outraged with Brown for having rigged the policy process from the start.
Read More Comments

Justin Trudeau the abortion bully
Not only is abortion illegal in Ireland, the nation also boasts one of the world’s lowest rates of maternal mortality. The abortion industry along with their many friends at the United Nations claim that maternal mortality decreases when abortion is made legal. The Irish example proves them wrong and continues to be a thorn in their side.
Read More Comments 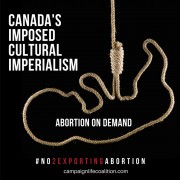 Ideological colonialism at the core of Canada’s foreign policy
The Canadian government’s imposition of Trudeau’s ‘values’ on the world’s poorest is nothing but ideological colonialism. But of course, because it deals with abortion, it’s ok. Business as usual in the House of Commons
Read More Comments

Justin Trudeau determined to spread abortion worldwide, despite global pushback
This is a despicable form of colonialism in which the Trudeau government is foisting its far left, globalist values on the rest of the world; in essence: ideological colonialism
Read More Comments

I will huff and puff and blow your house down
There is certainly something in the wind. Gale force winds. Eventually when I think about what has been happening in Ontario, I am reminded of the Big Bad Wolf telling the Three Little Pigs: “I’ll huff and I’ll puff and I’ll blooooowww your house down!” Kathleen Wynne means it.
Read More Comments
So-cons aren't going away
Thursday November 17th saw Ontarians in the Niagara region elect the youngest MPP ever to sit in the Ontario Legislature. At the same time, in an Ottawa-area riding, PC candidate Andre Marin was complaining about his by-election loss to Liberal candidate Nathalie Des Rosiers, pointing fingers at the grassroots membership of his own Party.
Read More Comments