Send a letter to your MPP.

On May 29, Ontario Attorney General Yasir Naqvi announced that he plans to create new legislation that will implement bubble zones around abortion clinics in Ontario. Naqvi, who is also the MPP for Ottawa Centre, represents the Liberal Party of Ontario and said that he intends to introduce a bill in the fall. 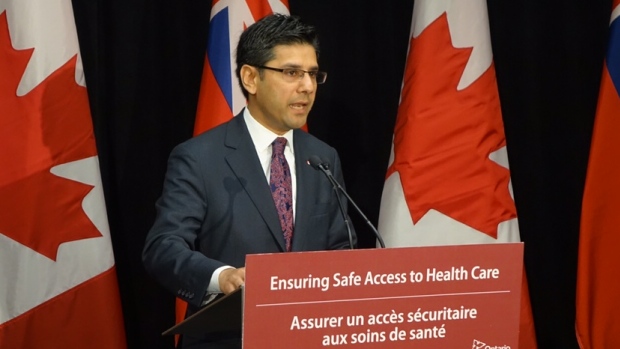 Bubble zones are areas around abortion clinics in which all pro-life demonstrators (peaceful or otherwise) are banned. These areas can also be referred to as injunctions because they can be put into place by the courts. Current laws in British Columbia ban all forms of protest from within 50 metres of abortion clinics and similar facilities (e.g. hospitals that provide abortions), 10 to 20 metres from the offices of abortion doctors, and 160 metres from their homes. The penalty for breaking a bubble zone? First-time offenders in British Columbia receive a jail sentence of up to six months or a $2,000 fine or both. Pro-“choice” groups are calling for even higher penalties.

To provide some context as to how disproportionate bubble zone penalties are compared to other laws, impaired drivers in Ontario are required to pay a $1,000 fine for their first offence and third-time offenders receive a jail term of 90 days.

In Ontario, pro-lifers were forbidden to enter 150 metres around three specific abortion clinics in Toronto and any hospitals and abortionists’ homes and offices in London, Brantford and North Bay. These temporary zones were brought about in 1994 by Bob Rae’s NDP government as a result of a $500,000 court case against 18 pro-life advocates. The case went dormant in 2001 and quietly expired in February of 2017, rendering the temporary injunctions null, though police still enforce them. The government is now appealing to the courts to have it reinstated.

Although the term “bubble zones” sounds like a lot of fun, in reality they are not. According to Louise Harbour, Executive Director of Action Life (Ottawa), the bubble zones that Naqvi is bringing to the province of Ontario are actually “an infringement to the Charter right to freedom of expression” and “place restrictions on freedom of speech.” Marie-Claire Bissonnette, Youth Coordinator at Campaign Life Coalition adds, “More importantly, the bubble zone[s] will impede [pro-lifers’] work in saving lives.”

The idea for an Ontario-wide bubble zone legislation stems from reports of harassment at the Morgentaler Clinic in Ottawa. The antagonism against pro-lifers began on April 19 with an opinion piece by Toronto Star columnist Heather Mallick regarding said clinic. In short, the article depicts all pro-lifers as violent criminals.

On May 23, Ottawa Mayor Jim Watson sent a letter to Naqvi asking the government to consider enacting legislation. Naqvi responded six days later with a promise to propose a bubble zone bill in fall 2017.

At the press conference announcing the introduction of the legislation, Naqvi told reporters, “Over the last month or so, I’ve seen some serious instances of intimidation, harassment, and even assault towards women who are trying to access abortion services and other reproductive health services.”

On the other side of the debate, bubble zone legislation has pro-life groups very concerned.

Steve Karlen, Director of North American Campaigns for 40 Days for Life said, “Bubble zones are problematic because they aim to censor the most important conversation in the world - the offer of help to mothers on the brink of making the worst decision of their lives.”

The organization’s “mission isn’t to hold protests, but prayer vigils in the public right-of-way in front of abortion facilities,” he says.

“Every vigil is peaceful and prayerful. We encourage participants to use signs that are encouraging and life-affirming.”

In response to claims of violence, Karlen points to his organization’s policy in which volunteers are required to sign a Statement of Peace “which is a pledge to pursue only peaceful, law-abiding solutions to the violence of abortion and to refrain from any threatening or abusive conduct. If a volunteer were to violate this statement, he or she would no longer be able to participate in 40 Days for Life.”

He adds, “Abusive conduct is already against the law. It would make more sense to prosecute actual violations of the law than to place a blanket prohibition on the exchange of ideas in a public space.”

Harbour condemns any abusive behaviour by protestors and paints a rather different picture of pro-life gatherings: “The message to women is: you are not alone. Help is available. You have other options.”

“The presence of pro-life people at abortion clinics also sends a message to the public that every life matters, born or unborn. It is also a reminder that abortion takes a human life.”

Harbour questions whether the harassment claims are even legitimate.

“When allegations such as these are made, proof must be provided. The clinic has offered no evidence to support these claims of spitting, harassing and yelling at women as they enter the clinic. This behaviour is denied by pro-life persons present at the clinic. Yet new legislation severely restricting freedom of speech near abortion clinics will be presented based on allegations. It seems that claims take precedence over proof and legal process.”

Bissonnette reiterates that pro-lifers are generally respectful, but challenges that even if the claims of harassment are true “does the government really need to take away the Charter right to freedom of expression from a large section of the population just because of individual cases of yelling and spitting?”

“This kind of discrimination doesn’t happen with anyone else in society, nor would it be acceptable to any other group.”

A comment made by Naqvi hints at the political and social bias against pro-life supporters.

At the May 29 press conference Naqvi said, “We are talking about two competing rights - in our view one is paramount, which is a woman’s right to choose.”

Karlen responded by reiterating that, “A personal right as it is labelled here, should never trump or come at the cost of another person’s life.”

Alissa Golob, Co-Founder of Right Now, also analyzed the quote and commented on the political bias.

“Section 1 of the Constitution Act of 1982 gives Canadians the freedom of speech. I would challenge Yasir Naqvi to show me where in the constitution a ‘women’s right to choose’ is found. I’d also like to know how providing women with more options (abortion alternatives) outside of clinics somehow harms a woman’s right to choose.”

However, it was another quote by Naqvi that left pro-lifers questioning his true intentions.

The Ontario Attorney General said that “targeted consultations” with health care and advocacy groups were planned throughout the summer to ensure “balance” when enacting the bubble zone legislation. Campaign Life did not expect to be contacted; however, they recently received a request from the Ministry of the Attorney General and met with the Director of the Policy Division, Marie Irvine.

“At first, we assumed the word ‘targeted’ implied that consultations would be limited to organizations that supported the bubble zone legislation because the government has been incredibly biased in the past,” Bissonnette says. “Though the cards are stacked against us, there’s still hope that they will see how extreme and unjust this legislation is.”

So far, none of the other three pro-life organizations interviewed (40 Days for Life, Action Life Ottawa, and Right Now) have been consulted by the government concerning the bubble zone legislation.

Harbour is particularly disturbed that the bubble zones are just the beginning of increased aggression against the pro-life movement.

“It could mean yet further erosion of the right to free speech.”

She cites examples of attacks against an Action Life advertising campaign at a kiosk near the Morgentaler clinic a few years ago and the French government’s restrictions on pro-life websites as grim reminders of the push to silence the abortion conversation. Complaints about Action Life’s advertisements resurfaced in 2016.

As to what will happen if the legislation is enacted, Karlen says that his work “would continue at a greater distance from the abortion facilities” but that they will “continue representing and providing a voice for the most vulnerable of our brothers and sisters.”

Bissonnette comments that there will be “additional challenges” for Campaign Life Coalition should legislation be enacted especially since her organization helps coordinate Life Chain, the National March for Life, and 40 Days for Life campaigns in Canada. She encourages all people who are concerned for freedom of speech in Canada to lobby their MPP, sign their petition, and spread the word.

Kevin Geenen is from Hamilton, ON and is attending the University of Ottawa for Communications and Political Science. He can be contacted via email at [email protected]